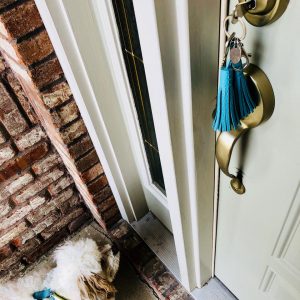 Mr. Max getting ready to enter our new house!

Once upon a time, there was a girl who dreamed of living in a cottage and filling it with color. When she was in her thirties, she bought her first house and did just that. It was the era of mauve and seafoam green and she “did it” to the nth degree.

Then life happened and she got married and moved out of that cottage into a new house onto which she also put her color filled stamp. And then life happened again and she got divorced and moved into a townhouse. And then into an apartment and into a another apartment and then rented a bungalow. But like Goldilocks, none of them felt “just right”. She craved the creativity she had felt when she owned a space of her own (and yes, she read Virginia Woolf in college).

So now, nearly twice the age when she bought her first house, the girl — now a woman proudly wearing her hard-earned sixty years — bought another house. A house that she hopes to transform into her Color Filled Cottage. And she’s inviting you to come along for the transformation.

Who knows, it might not be just the house that is transformed.

Turning a Dining Room into an Office »