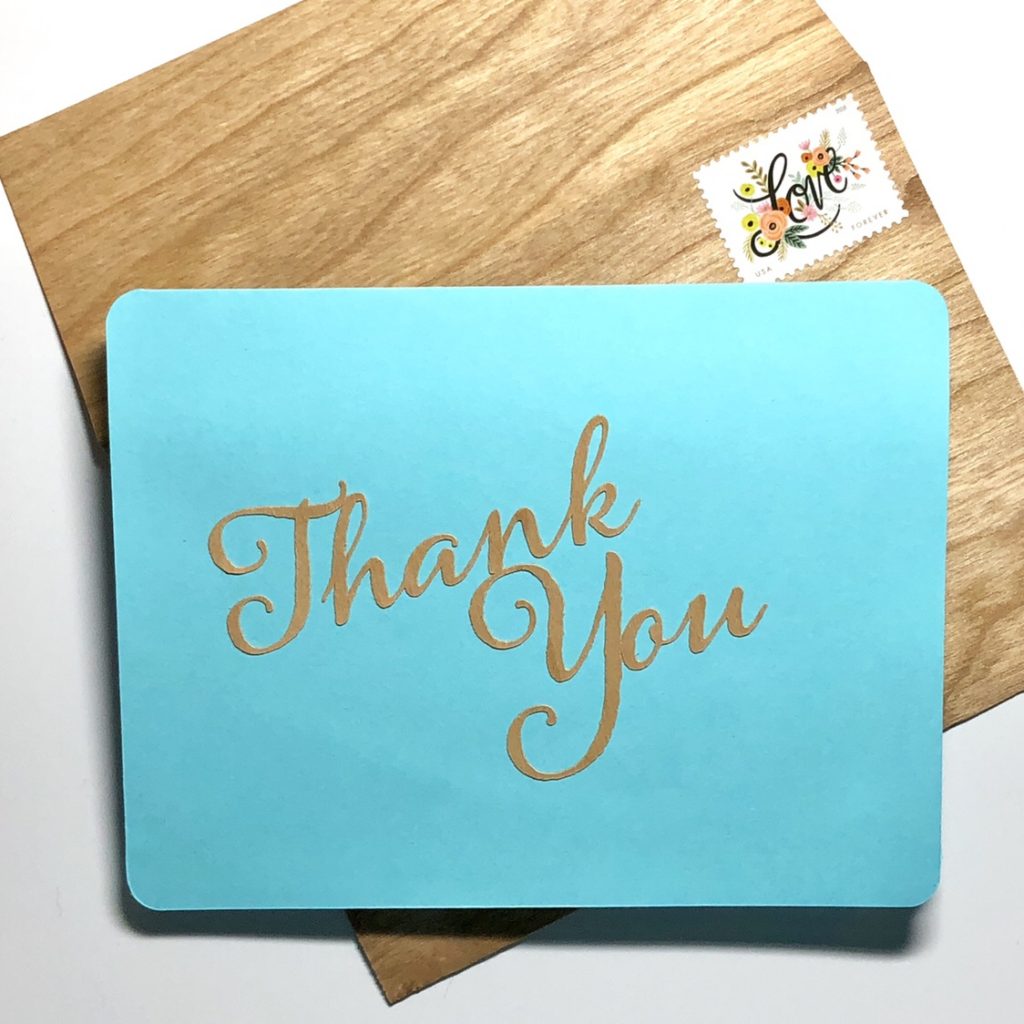 When I got the Cricut Maker, I was excited by the possibility of being able to cut balsa and basswood with it. But Cricut took extra time to make sure the Maker’s special Knife Blade functioned exactly how they wanted it to work and have only just released it this past week. I’ve definitely placed my order for one! (And if you’re as excited by the Knife Blade as I am, make sure to read Angie’s review at The Country Chic Cottage!) 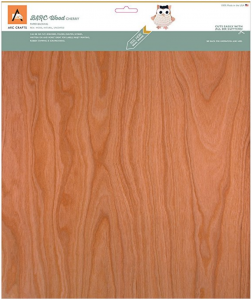 But before it comes, I had a project I wanted to do with the regular blades — I had paper thin wood 12×12 from Arc Craft and wanted to cut out words “Thank You” to put on the front of cards for my niece who’s getting married this summer. (And to be honest, upon reading about what the Knife Blade will and will not do, it likely won’t do the fine cuts my font choice will have).

So I’m going to use the Fine Cut Blade, but what mat? Well, the wood paper is paper backed, but kinda ripply because it’s REAL wood! So I decide that the Strong Hold Mat is the one that will hold it in place while doing multiple passes of a detailed design.

I created my words outside of the Cricut Design Space because I wanted to use a font that is not part of its core set of fonts. I am fanatically in love with the Alana font from Laura Worthington Type — so in love with it that it’s the font I’ve used in my Color Filled Cottage logo! But when I tried to use it within the Cricut Design Space, the spacing was really wonky, which was not the look I was going for. So I created my “Thank You” in Canvas Draw on my Mac and then saved it as a jpg to upload into the Design Space. I then duplicated the words multiple times until I had three columns, five rows for a total of 15 “thank yous” on a 12×12 sheet. And then I added a long line between the three columns (for a reason I’ll share in a minute). 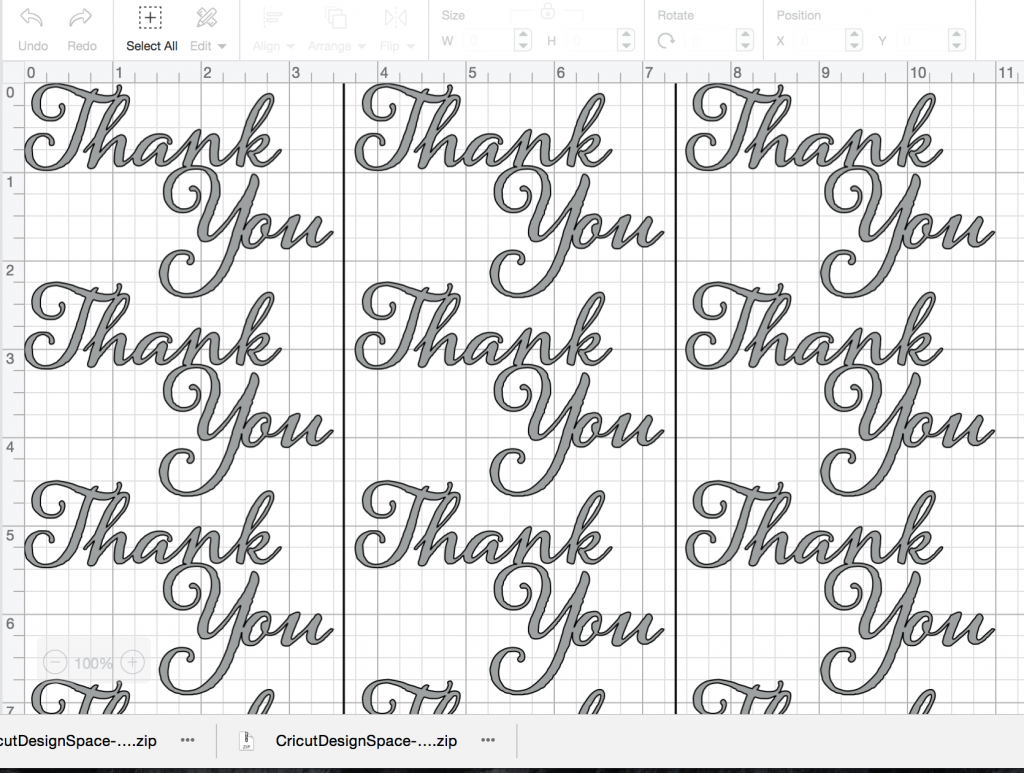 Here’s what the whole sheet looks like upon sending it to “MAKE”. 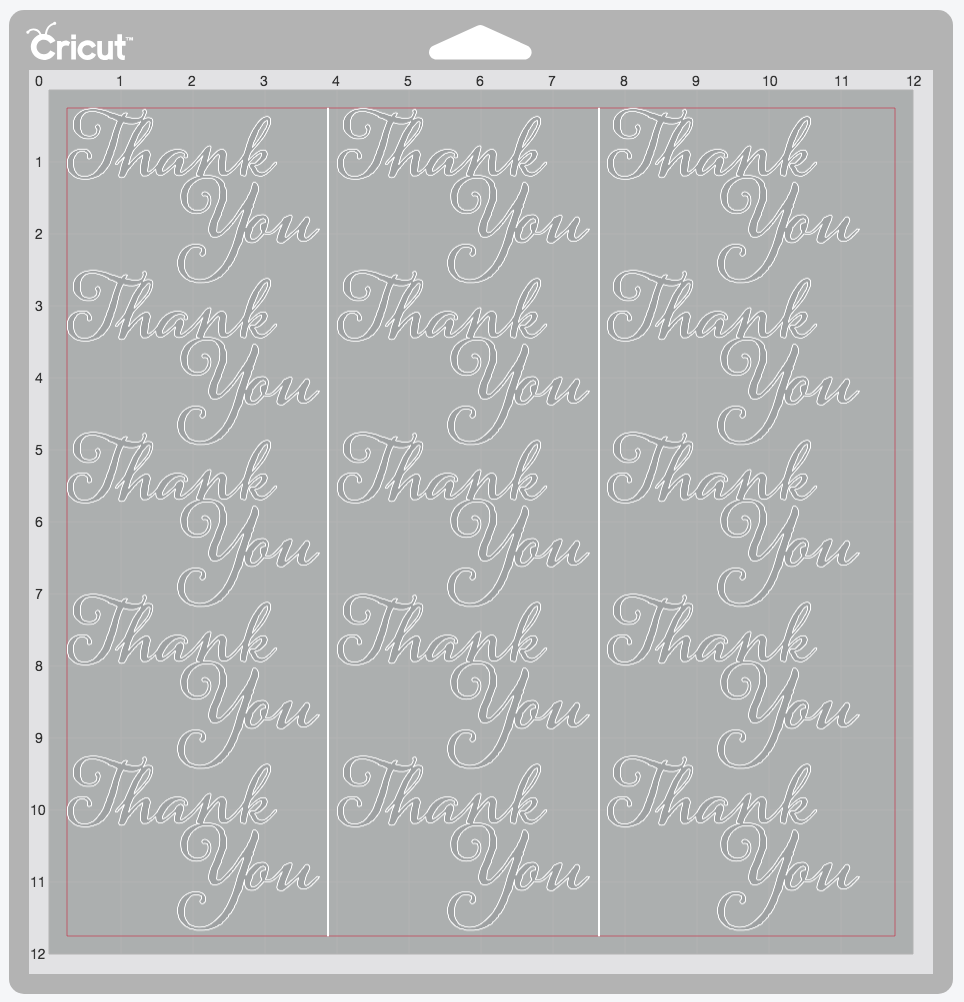 I used the following setting on my Cricut Maker: Cardstock for Intricate Cuts and increased the Pressure to the “More” setting. 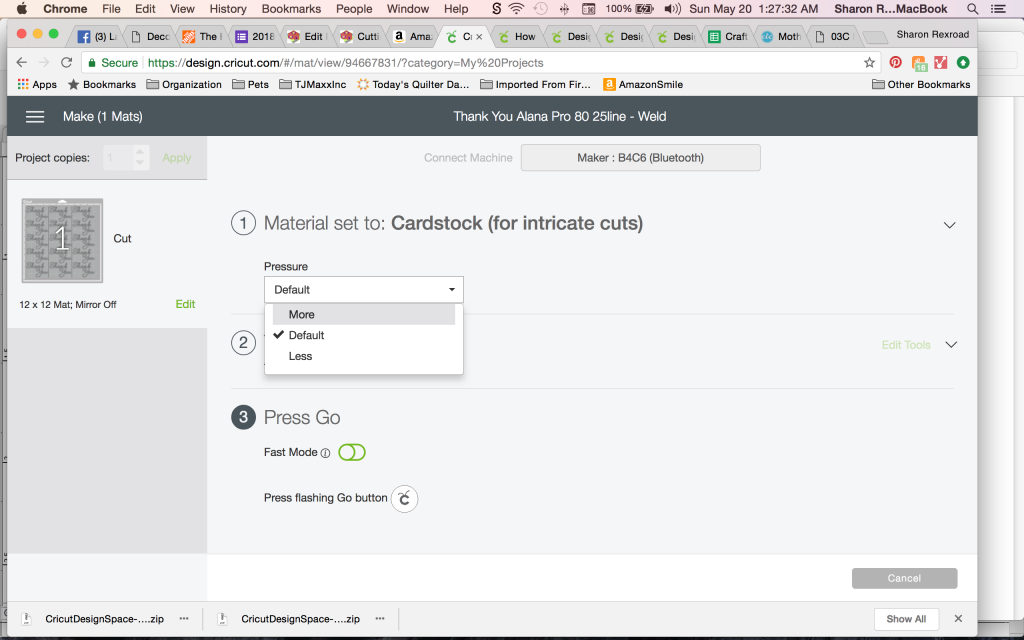 And then just sent it to the printer! (Fingers crossed as I was doing a full sheet).

It actually took almost twenty minutes to cut out the full sheet of 15 “thank yous”. Here’s what it looked like as I started to pull off the background. See how I’m just doing a single column? That’s because that long line let me easily split the wood into sections! I used the sharp tip of a knife to lift off the detailed areas, mainly because I couldn’t find my Cricut tools — after all, I’m in the middle of moving households. 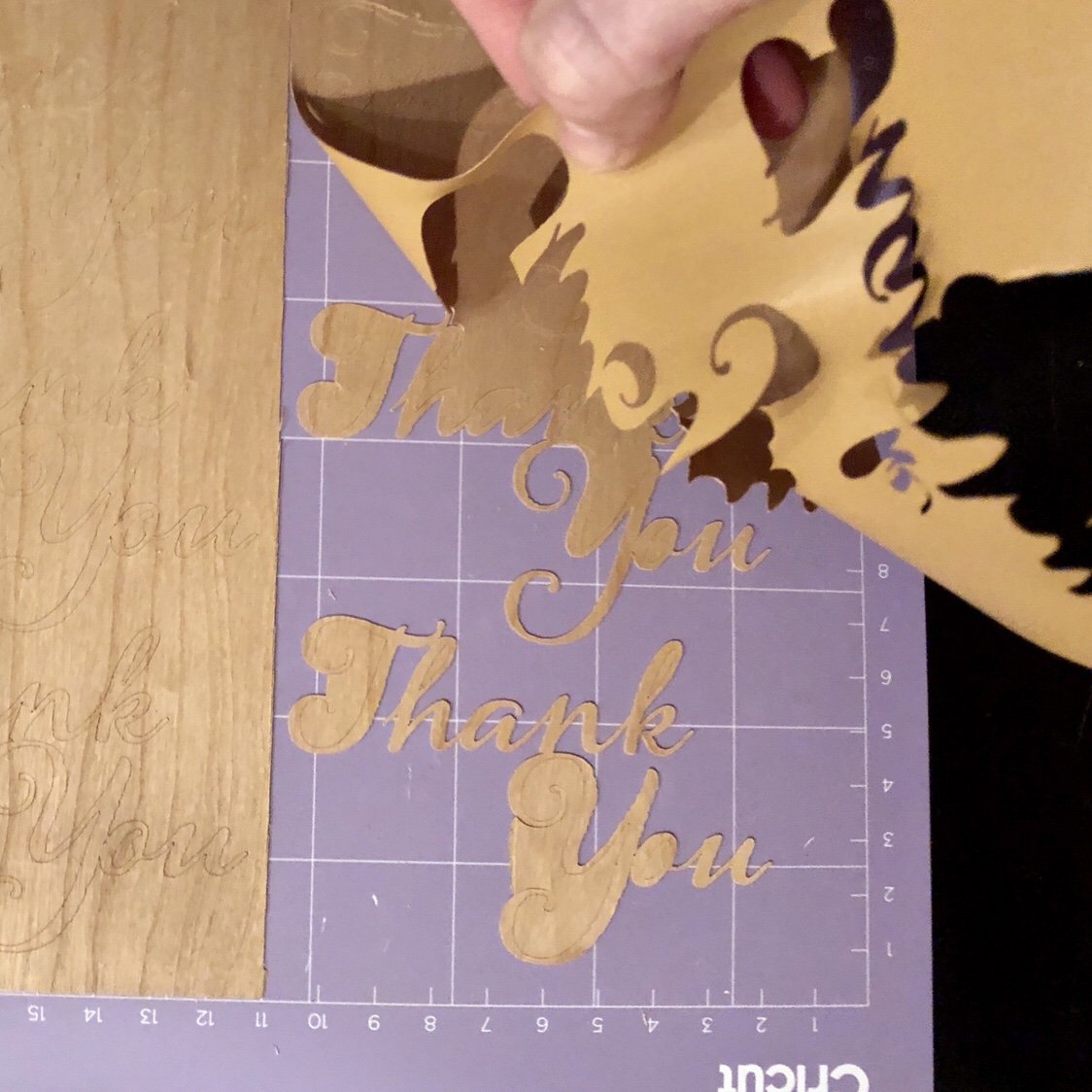 And here’s what a single set of words looks like. The jagged edge is not a cutting error, but rather a feature of this font which I thought made it very appropriate for words in wood. There is a smooth version of the font as well, but I love the “rawness” of the original. 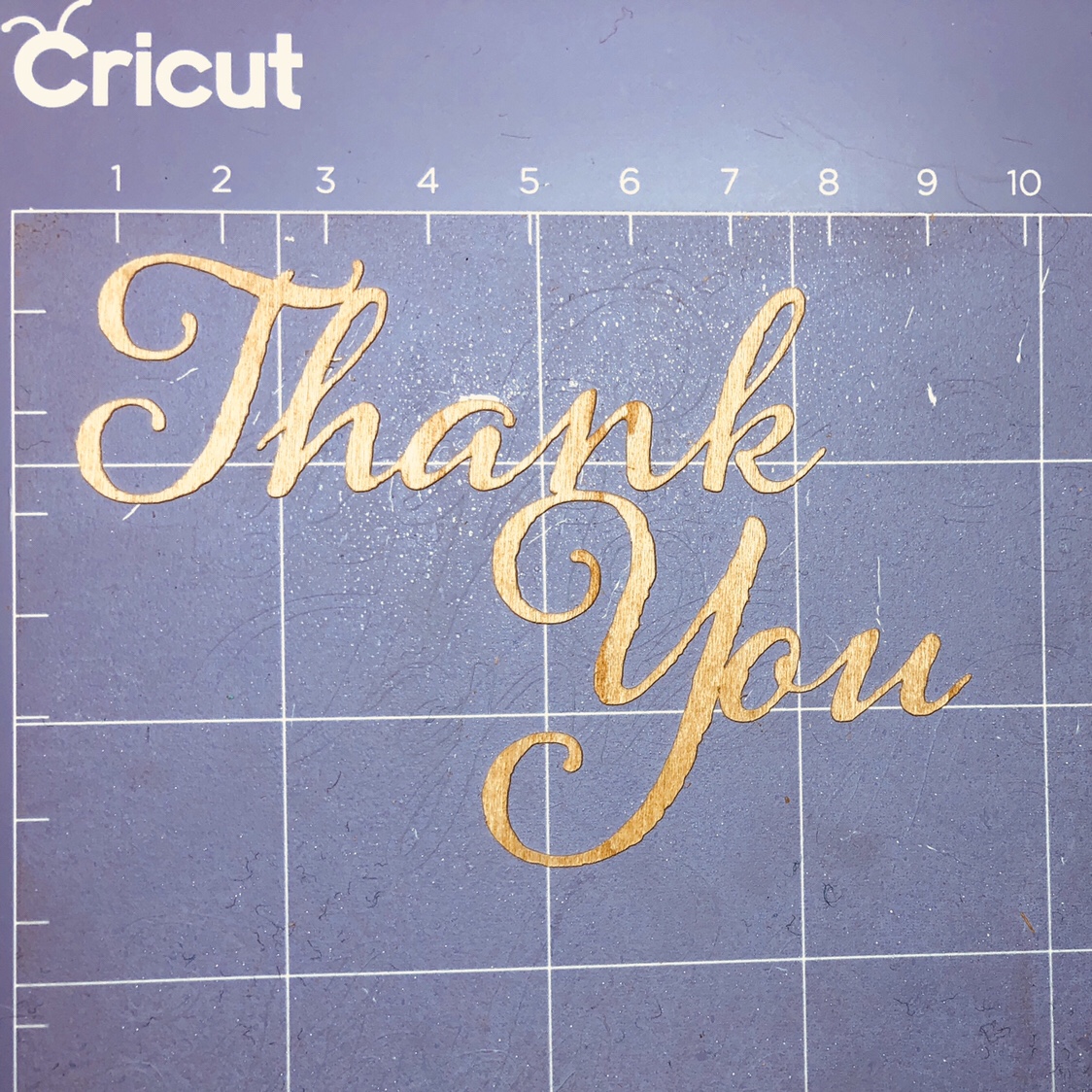 So now we get to the true tales of what did and did not work.

In the future, I’ll just order the wood paper with the adhesive already on the back. Lesson learned. (And a full sheet of 15 sets of already cut words wasted because they’re not pre-sticky-ized. Bummer.)

Here’s what the words look like cut into the wood. And remember, the jaggedness you see is not bad cutting, but rather the style of the font I chose to use, Alana Pro. (Oh, and some of the coloration you see may not be natural — the Cricut mat is NOT this bright of a periwinkle, but playing with the exposure and saturation allowed the cuts to show up better and that’s what you really want to see, right?) 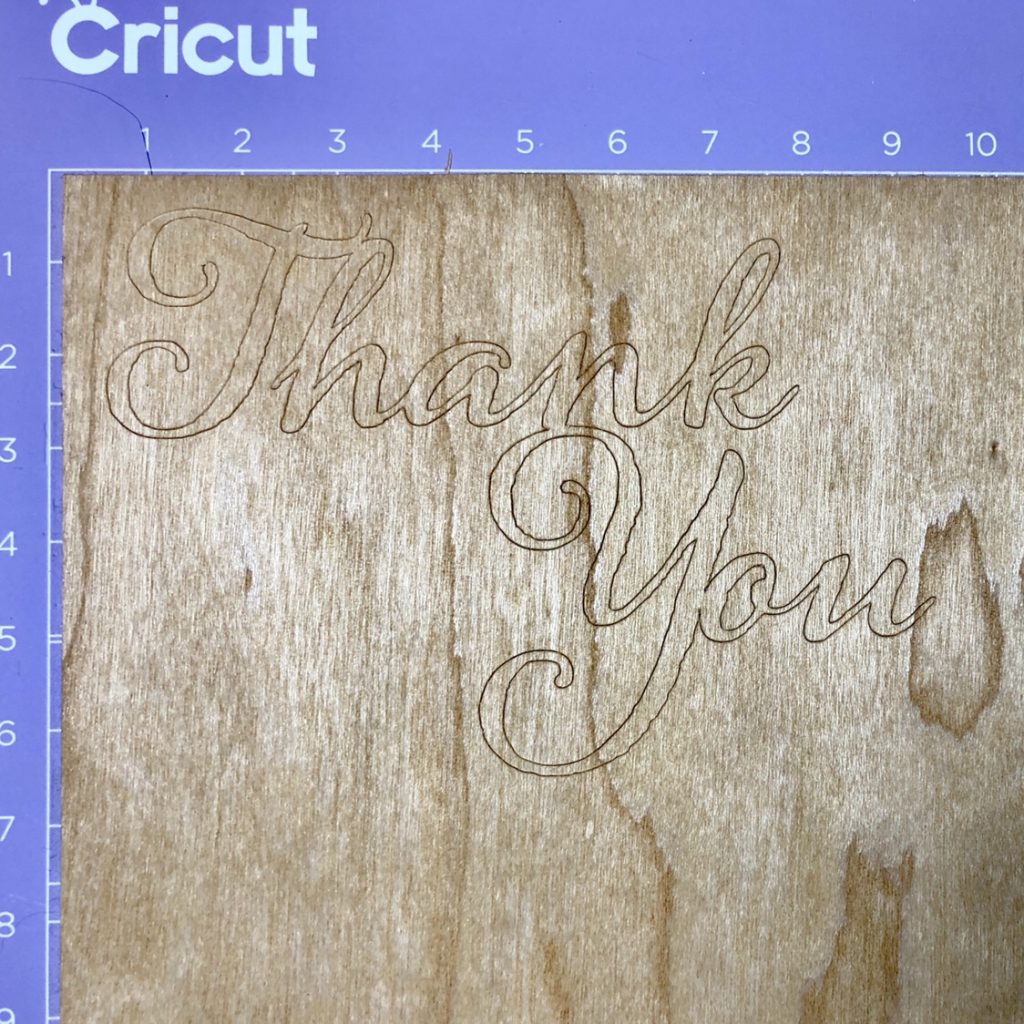 And here’s what the “Thank You” looks like with all the background wood peeled out. I used the tip of a utility knife because my proper tools were packed away in the midst of the move, but the actual Cricut tools would have made it easier. I did find that if I gently bent the mat away from the wood paper, it was easier to remove the excess. And yes, the background wood did break apart a few times, but it was easy to pry away the next section. I left the centers of the H and K loops and the center of the O and the A as the last things I pulled away from the mat. 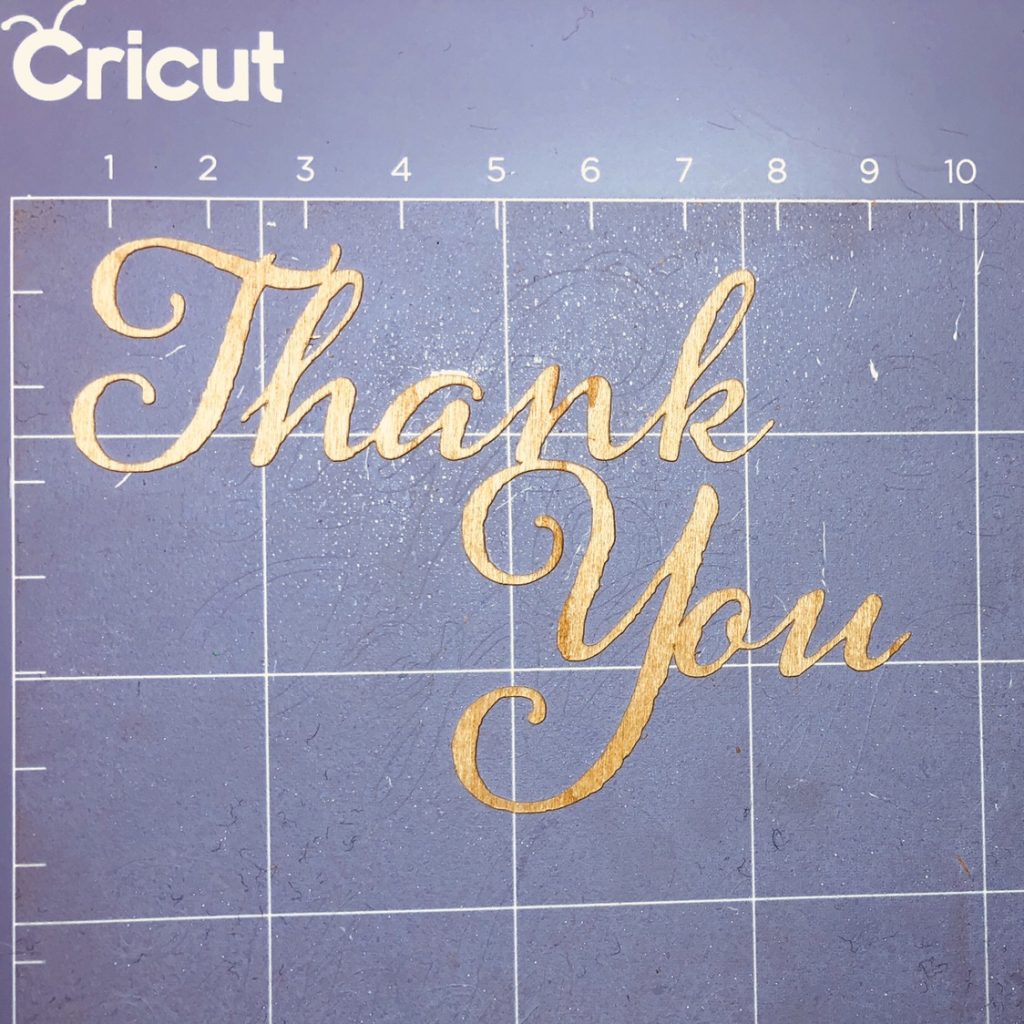 I then laid transfer paper on top of the words and burnished it well onto the wood paper. You can kinda see how the transfer paper dips down around the letters. This is because the wood actually has some thickness to it, as opposed to a photograph of wood. 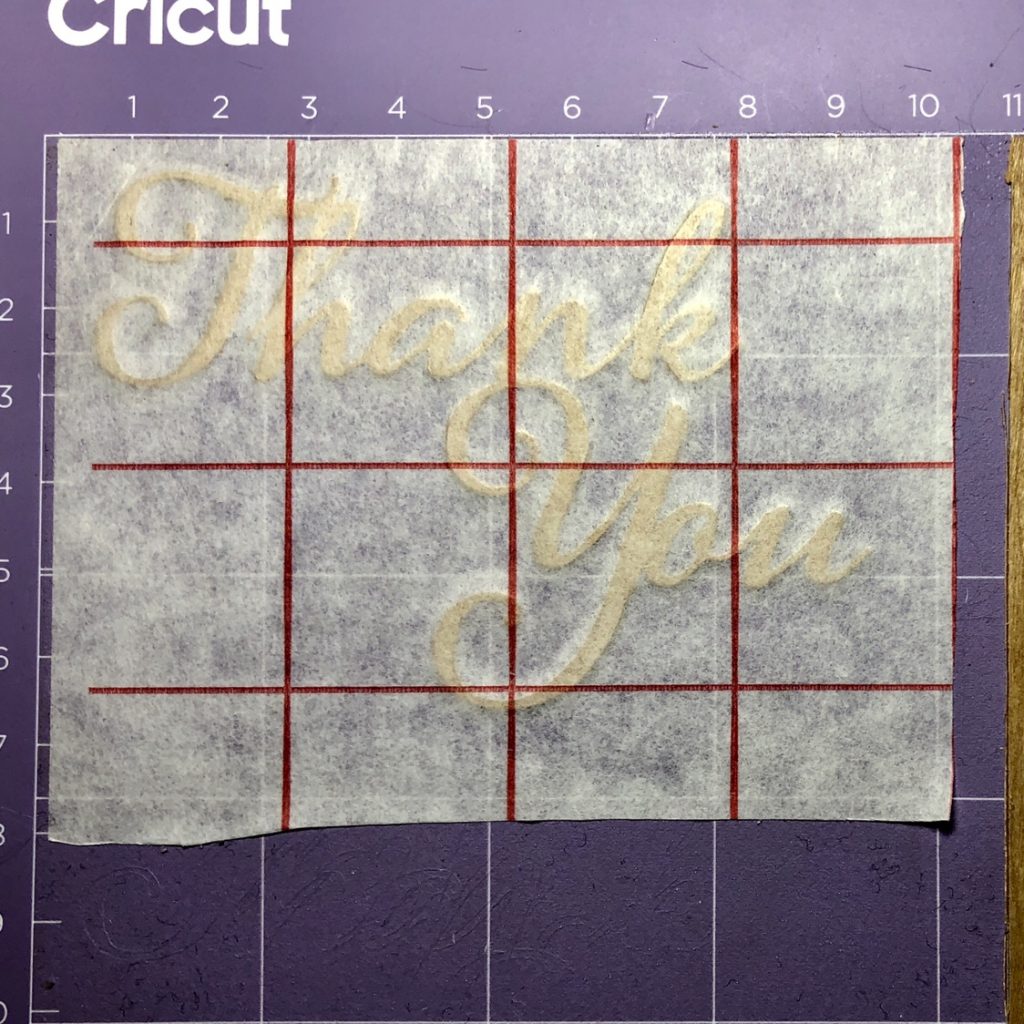 Here’s where the rubber met the road. Would I be able to peel the “Thank You” off the mat with the transfer paper or would it stay stuck to the mat? (Deep breath, everyone!) YES! With the occasional encouragement of the utility knife tip I was able to gently raise the wording off the mat. I found that peeling the transfer paper off the mat in a diagonal angle as opposed to straight across the words, the letters seemed to release from the mat best. 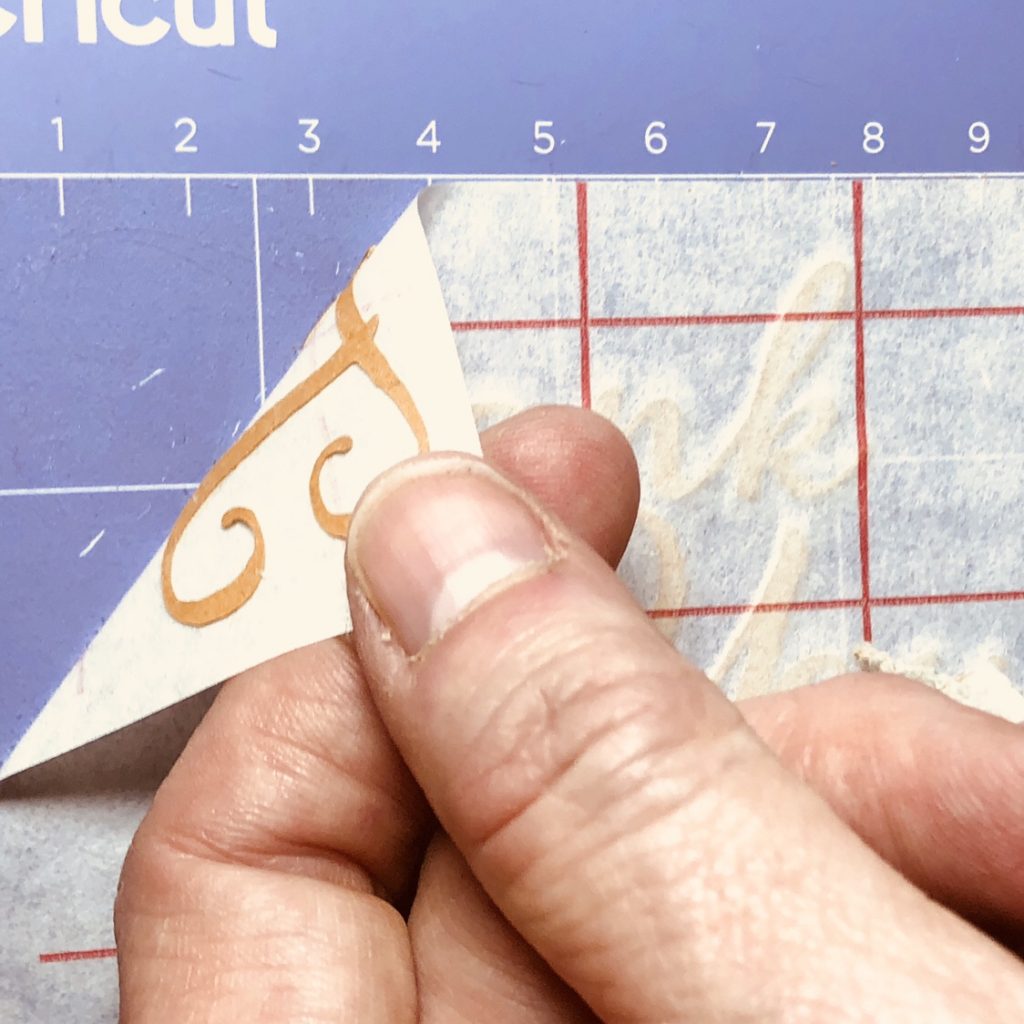 So here’s the transfer tape with the words attached to the back. I first thought I’d lay it out straight on the card — after all, isn’t that what the grid is supposed to help me to do? But I know I’m obsessive compulsive about geometry and if it wasn’t perfectly centered and straight, it would bug the heck out of me. Are you like this too? 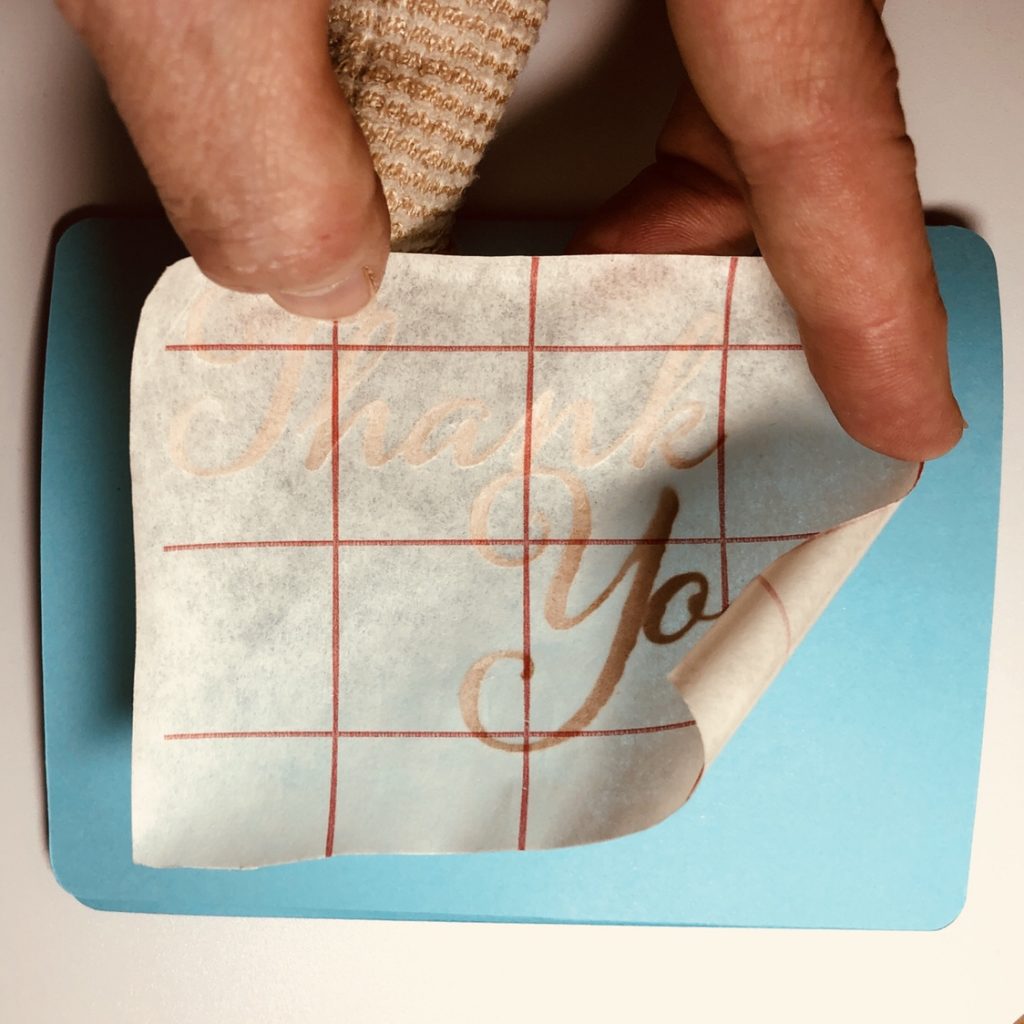 So I decided to put the words on an angle. Here’s my eyeballing the position. 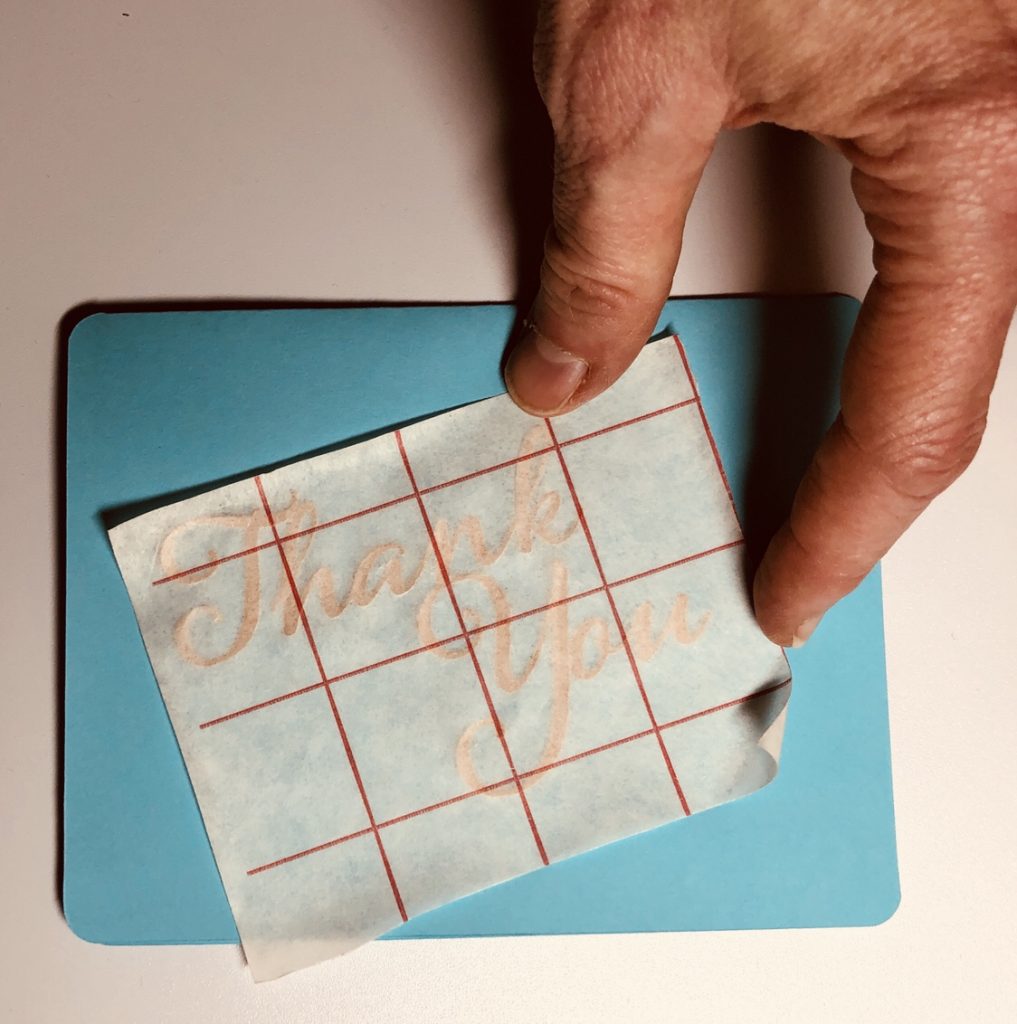 Once I was satisfied with the positioning, I stuck the whole thing in place, and then burnished the individual letters  using the end of the handy utility knife (again, mother of invention). I had a hard surface under the card as well. 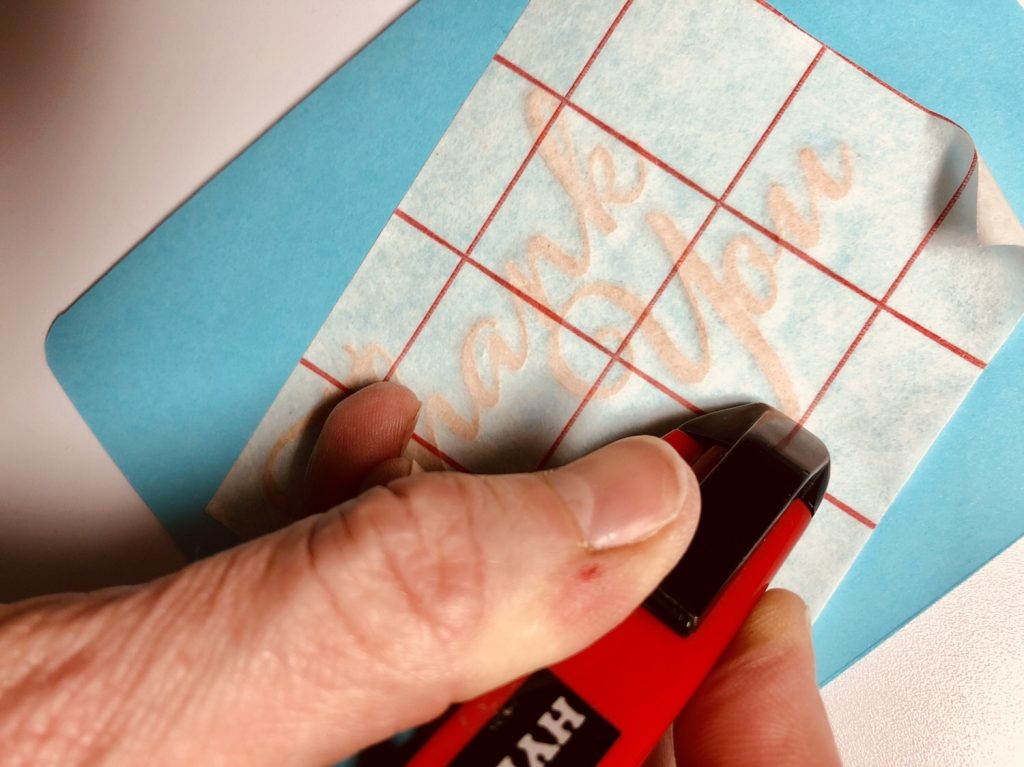 Here it is burnished. You can see you can really see the wood letters through the transfer paper better here than what you saw two pictures ago. That told me that the burnishing was complete. 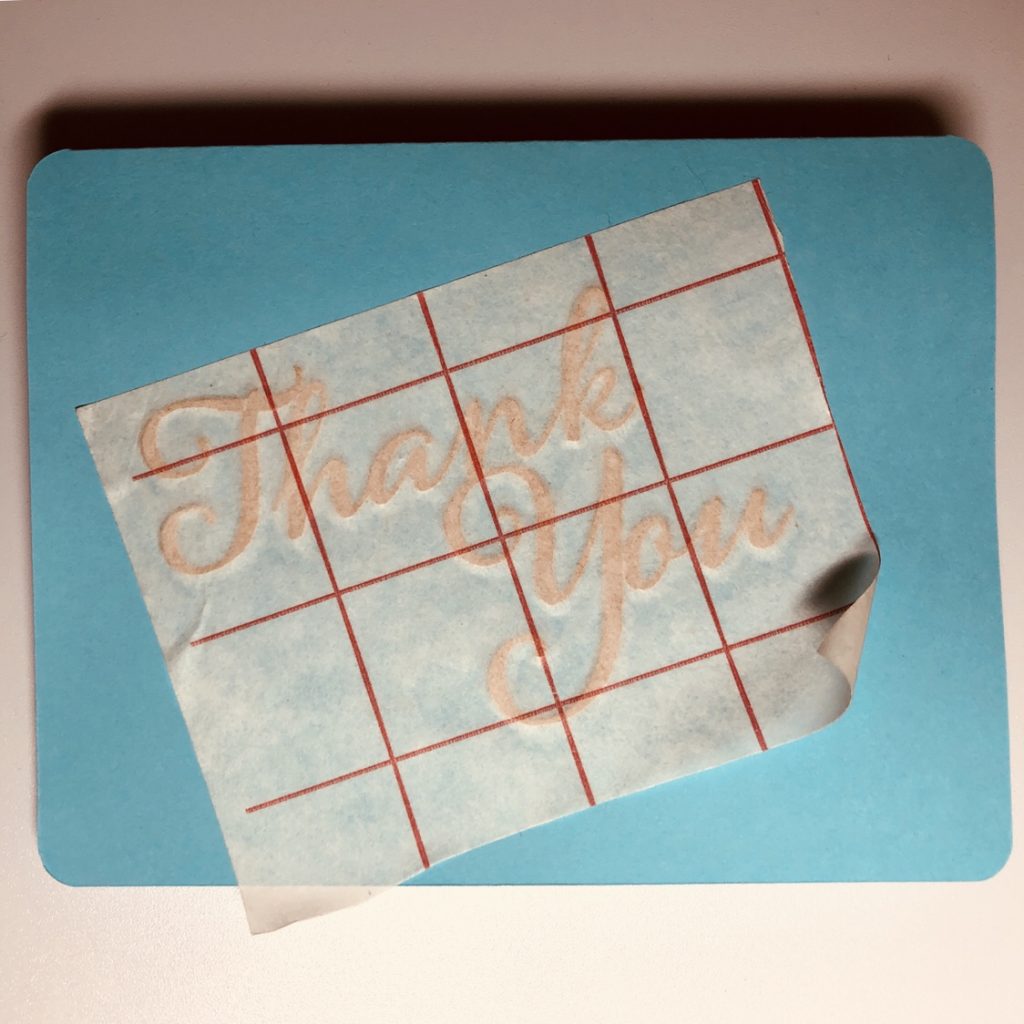 I rolled the transfer paper off gently, again using a diagonal pulling motion away from the card. The wood letters stuck beautifully! Yay!!!!! 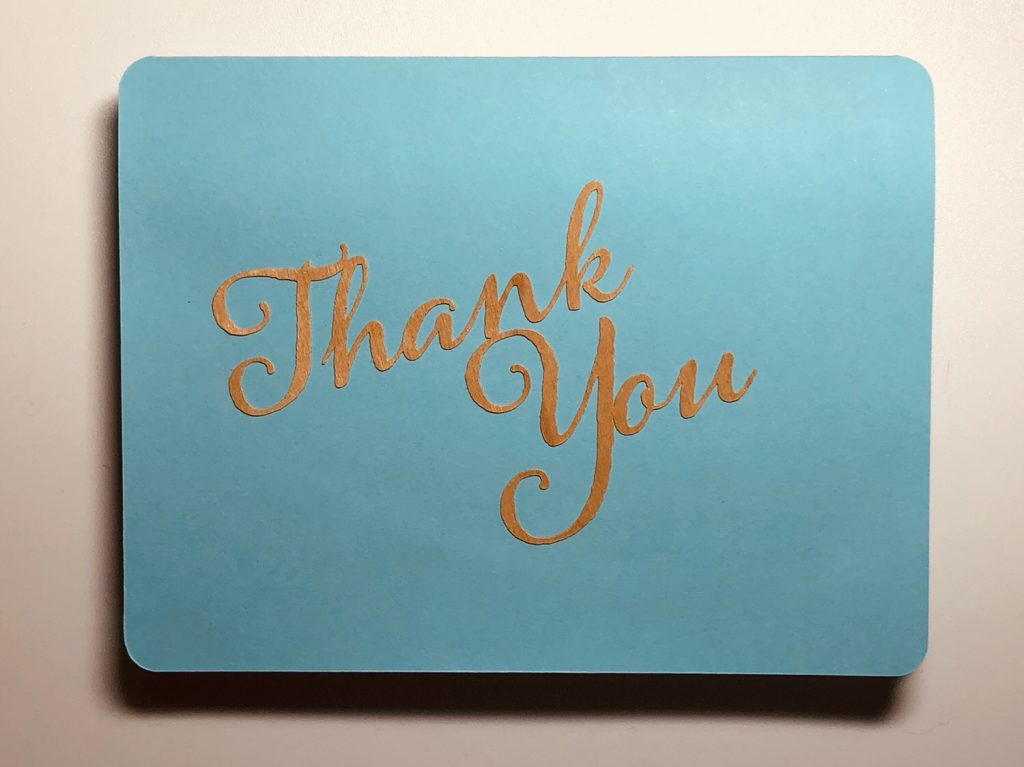 Here’s the final card, with the matching wood envelope from Arc. I hope my niece and her fiancé like them when I give them to them at the pReception this coming weekend! We’re not doing a bridal shower, but rather a party a month in advance of the wedding so that her grandmother in South Carolina and other friends and relatives unable to come to the Michigan wedding can share their joy.

Now here’s the fun part for you! I’ve done a file that is just a single “thank you” that YOU can cut out yourself. If I understand how the Cricut Design Space works, if you go to https://design.cricut.com/#/landing/user-project/94790474, you should be able to access my file. If it doesn’t work, let me know by emailing me and I’ll try to figure it out — I’m new using the Cricut platform so it may take me a wee bit to figure out its nuances. 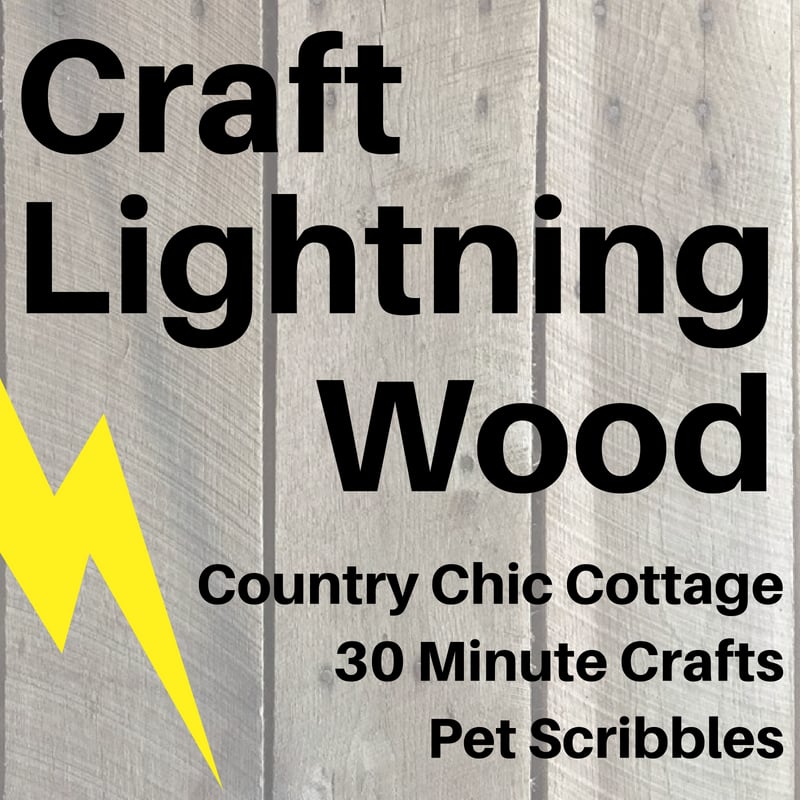 And my friends at Country Chic Cottage, 30 Minute Crafts and Pet Scribbles are sharing MY project and those of a number of other blogging friends all week long in the Wood version of the popular Craft Lightning. I can’t wait to see what everyone else did!

All the projects somehow involve wood and should be able to be completed in 15 minutes or less. If you knew you could do wood projects that fast, wood you? I wood!