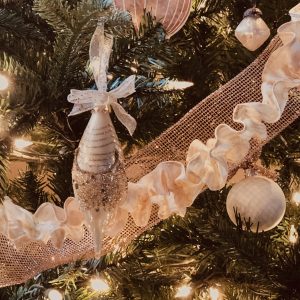 The living room of the Color Filled Cottage has 12 foot ceilings – not what one typically thinks of as cottagey, I know, but oh so gorgeous! For this, my second Christmas in the Cottage, I’ve invested in a 9 foot artificial tree to take advantage of all that vertical space. Decorating it is both an opportunity and a challenge.

An opportunity because it’s a wonderfully huge surface to decorate – I get to use ALL the ornaments I’ve collected. (I mean, a girl doesn’t work at HomeGoods and then Marshall’s for over five years without a few ornaments following her home…) And a challenge because I’ve been decorating a five foot tree for the last several Christmases so I’ve got to figure out how to decorate the wonderfully huge space!

One of the things I know I want to do is diagonally wrap the tree in ribbon. Which has given me the excuse to partake of all the recent holiday tours in blogland for inspiration.

p a u s e
while I disappear for a couple of hours…or days. 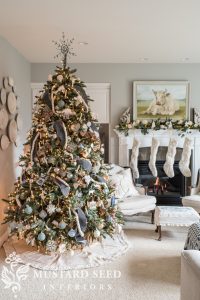 I was especially drawn to one ribbon wrapped tree – that of Marian Parsons (or Miss Mustard Seed as she’s also known). Not only did she have ribbon in her tree, she augmented it with a white felted ball garland! 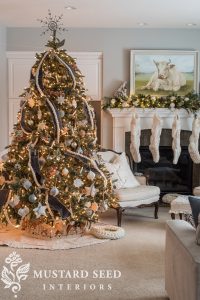 The first picture is how she styled her tree in 2018; the second styling is for 2019, when the ribbon and garland were placed by her sweet husband Jeff while Marian recovered from shoulder surgery.

Notice the subtle difference of the felted ball garland being atop the companion ribbon as opposed to being next to the ribbon. I think Jeff has a more literal style and Marian, a bit looser! (I can just hear her say, put the felted garland with the ribbon, Jeff – and he did!) It’s like the skier that stays in the center of the path coming down the mountain versus the skier that zigs and zags (and if she’s like me, sits down waaaaay too many times on the way down).

And while I love her trees, and her ribbonry, I see the Miss Mustard Seed look as being more rustic and farmhouse than my more frilly romantic style. So what I’m borrowing from her trees is the idea of a companion to my ribbon, not the actual white felted ball garland.

My core ribbon is a 2.5″ glittery netting that is halfway between blush and copper in color. I want my companion garland to complement the ribbon color and to be narrower. And I want to take my frilly and romantic look literally and create a continuous run of ruffled fabric for my garland – I’m going to “frill” my tree! And while there are rolls of ribbon already ruffled on the market, I want to make my own…and I want you to be able to make your own too!

Pick the Fabric for Your Ruffle

I knew I needed a lightweight fabric (so it’s easy to ruffle) with a bit of body to it (so the ruffle doesn’t wimp out on me). The premade ruffle ribbons I’ve seen are made of silk dupioni and I wanted something a bit more casual. My beloved quilting cotton might not have enough stiffness and I really didn’t want to add sizing or starch for this project if I didn’t have to. Plus, quilting cotton typically has a clear wrong side and right side.

I don’t know about you, but I ain’t got time to mess with which side of my ruffles show as it wraps around my tree!

And then it hit me – the batiks at my local quilt shop don’t have an official right and wrong side. There might be a bit of a difference in how a dye takes or spreads on one side of the fabric versus the other, but it’s really a dual sided fabric. And cotton batiks are a bit stiffer than standard quilting cotton, so will make a ruffle that doesn’t go limp. So it’s a win-win!

I found a butter and peach and coco batik in the clearance room at my local quilt shop and bought all ten remaining yards! I’ll be in ruffle heaven. I also picked up a metallic thread because, well, this gal loves a little glitz!

In addition to loving good fabric, I’m a firm believer in having the right tool for the job. So if you’re looking for something for Santa to add to your stocking, add the following to your “I’ve been nice” list:

As a reference, I’ve included the foot number I used with my Bernina 790+.
Although I am a Bernina Ambassador, I am not paid for using or recommending these.

There are alternative to all these feet and tools, but I think they make life easier and your finished project more polished.

The pattern on this particular batik ran parallel to the fabric edge and wasn’t one I wanted to highlight. So I decided to cut my strips for my ruffles on the bias.

Sew the Strips Together

You’ll want to make one long continuous strip. You can make simple seams, but I opted to make french seams as they are more finished. You can chain sew them together to simplify the process.

You can serge the edges of your strips (which is what the store bought ones showed), leave them raw (which would be cool in a farmhouse setting), or make rolled hems. I opted for the last option. 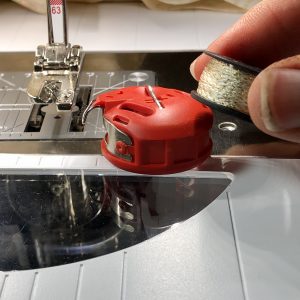 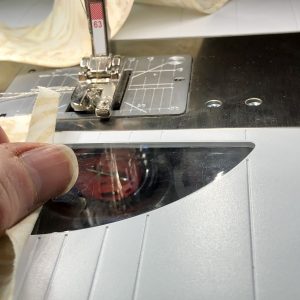 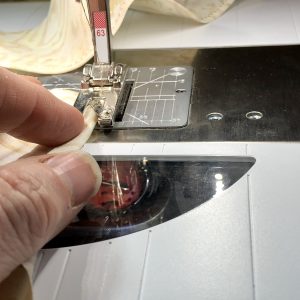 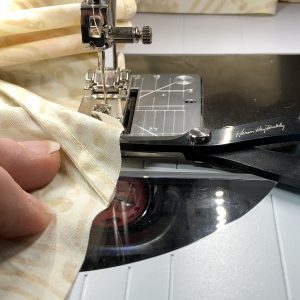 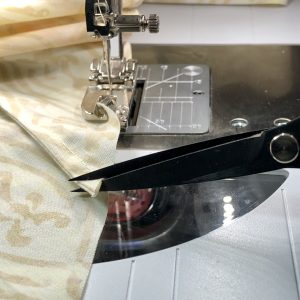 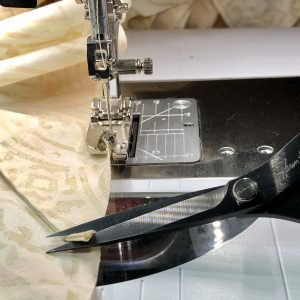 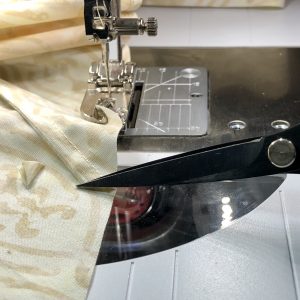 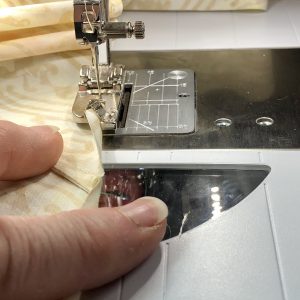 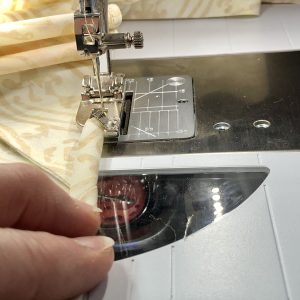 Repeat process with other side of strips, flipping french seam in opposite direction from first side.

Ruffle Down Center of Strips

Once both edges of strip are hemmed, flip strip over so seams are on the underneath side. 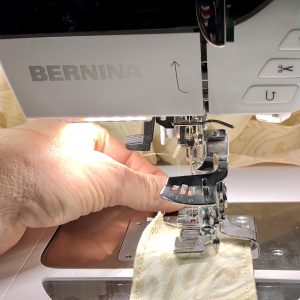 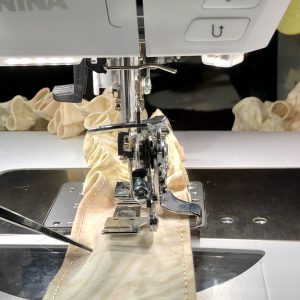 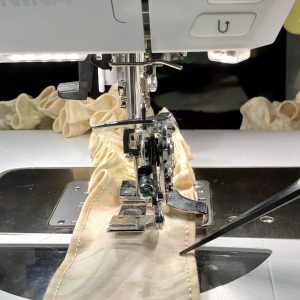 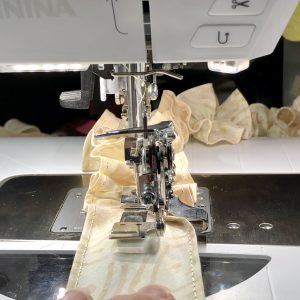 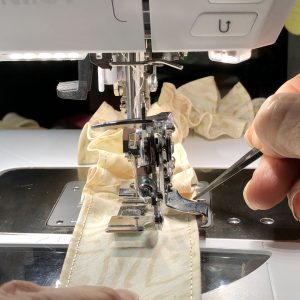 Celebrate the creation of your garland! Add it to your tree’s ribbon, either skiing down the middle or going from side to side (I discovered that I tend to the latter style). 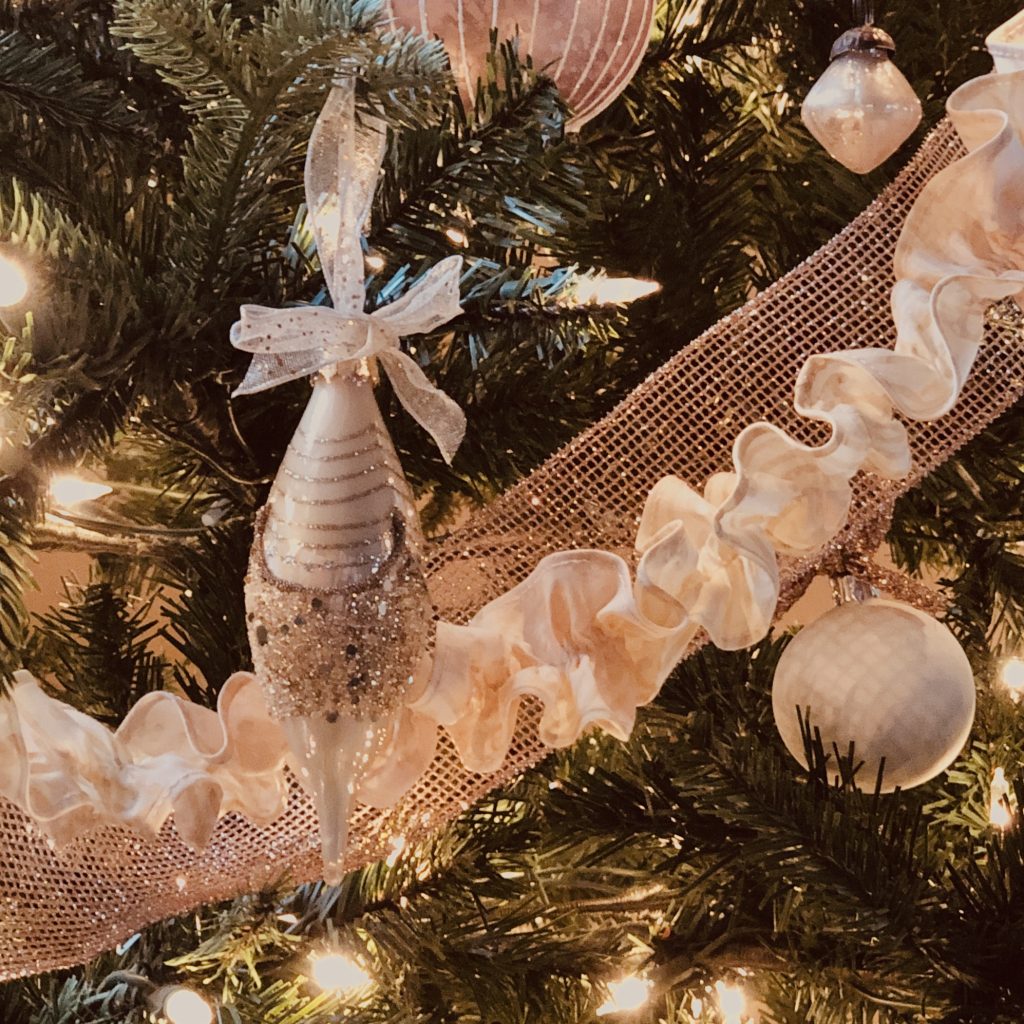 Here are some other great Christmas decorating, craft, and baking ideas from a few of my friends. I’ve gotten to know these ladies as part of the Mustard Seed Mentoring group I’m in. The group is led by Marian Parsons, Shaunna West and Wendy Batten (talk about a power-house and power-heart trio!)